Battletech, it keeps rolling on doesn't it? And, some new 'Mechs for Alpha Strike (A request from a reader)

Hello everyone, so sorry I have been absent of late. Frankly, its because I have been busy with my "500 Miles.." blog. Admittedly, this has hurt my other two blogs, so I do apologize sincerely to my readers.

But there is a lot to report out there, no?

So, let's get started:

Harmony Gold versus the World

Certainly seems that way, doesn't it? Harmony Gold (HG) has been floundering a bit since everyone found out that they don't in fact, hold the copyright to a good chunk of things Robotech, and in fact, aren't even going to hold that once 2021 rolls around. It seems Piranha Games, owner of MechWarrior Online, has gotten tired of the silly, and is making legal motions of their own. After they filed their summary judgment going for outright dismissal..HG decided to amend their complaint to stave off the inevitable. But, as far as I can read, and I maintain I am no attorney, the court isn't going to entertain this for too long.

1. HG's case is shaky at best, and the fact that they yanked Palladium's Robotech license, says to me "circling the wagons". To me, it's the last act before you see the legal version of unconditional surrender. It has got to be humiliating all around to see the number of Battletech players rejoicing at getting "cheap unseen".

2. I still maintain that HG will TRY to settle out of court, but the mood I have seen in this case from both sides, I would not count on Piranha, HBS, or IMR showing much in the way of mercy. I don't see the judge being real amused either.

3. How does it end? Badly if you're HG, I see summary judgements, court costs, and all sorts of punitive stuff being leveled at HG, and probably enough to crush them as a company. I feel badly for the folks who work there, as well as for Robotech as a whole, as it got me INTO Battletech, but at this point, HG did this to themselves.

It's going to take a while, probably the rest of the year in my estimation, as courts do not move quickly when making decisions on civil cases, but barring any more surprises in a case that has seen quite a few? This is going into the home stretch.

We have confirmed MSRPs on both the Beginner Set and the main set. Both are looking great at first blush, or at least as well as one can tell from photos.

The MSRPs according to the bg.battletech site are:

Am I excited? Yes. This is a chance to bring back CBT and Alpha Strike in one fell swoop. I am also encouraged by the quality of the miniatures. Plastic miniatures in general have really taken a step forward lately, and I credit CAD technology advances for much of the improvements we have seen.

Yes, I got a request from a reader for the old Tree Frog of Mechforce UK fame. Hey, can Panzerfaust 150 say no to a kind request? No, no he can't. So, I stated all the variants up of the Mayfly version. (No idea as to what the Ground Hawk is).

So, without further ado, let's talk about this 'Mech and her place in Alpha Strike:

The base design is fast with a 14" jump and a TMM of 3 in the 30-ton weight class, she will dodge a respectable amount of fire coming her way. She had better, frankly, because if she eats more than 5 points of damage, she is toast. Clan XLs do horrible things to structure points, kids. But it was designed in the 90s, when XL and mirrorshades were cool. Now we know better.

The armament fits of the variants tend to run the usual range, autocannon centered, PPC centered, laser boat, LRM boat, and finally a mixed weapon Prime design. Nothing too bad, but the laser boat might have taken it too far. This thing is light on heat sinks and it shows. 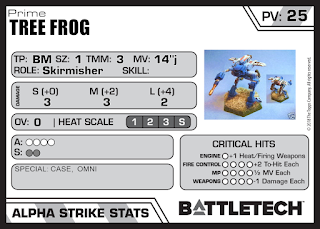 The Prime has a typical clan weapons fit for the Invasion era, a LPL coupled with some ER Mediums and a Streak-2. Frankly, the Streak-2 is a waste, but c'est'la'vie. She is a decent PV for a clan light, and she can put the hurt on quite a few Inner Sphere mediums and lights of the period. God help this 'Mech if she runs into a Scarabus or a Battle Hawk, they'd kill her outright, hence why I call her a skirmisher. 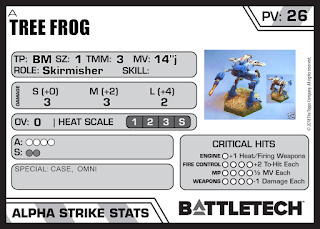 The A isn't much different from the Prime really, with an ER PPC, 2 ER Smalls, and a SRM 4. Frankly, I'd never get close enough with this 'Mech to use the ER Smalls and the SRM, with a Clan ER PPC, why in the world would you want to? Again, the name of this design is to hit, and run. Stress on the run. Screw Zell in this design, that's a good way to die. 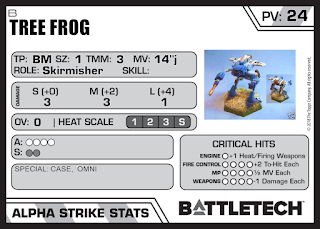 The B is a bit of an oddball, with an Ultra AC/5 and 2 ER Mediums in a design that frankly, shouldn't carry a lot of ammo. It tends to underperform a bit at long range, which makes me REALLY question the Ultra, but, at least with CASE, you aren't quite piloting a bomb. 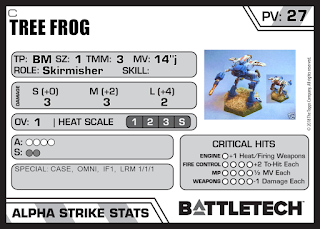 The Tree Frog C is a good idea, (best of the bunch if you ask me) if you gotta carry ammo in this design, make sure it lets you fight at a distance. I know the role of Skirmisher is still a bit of a stretch, but think on it. This thing is the fire support for the rest of it's Light Star, and if it has to get into a close range fracas, Clan LRMs have no minimums, and the damage numbers show it. But frankly, with this thing, use your mobility to get into a good firing position, fire a few volleys, and then run..run fast. 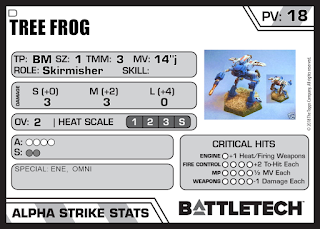 As much as the C is a good idea, the D isn't. A pair of Medium Pulse Lasers, and three ER Mediums make this 'Mech entirely too hot for it to really use it's firepower. It also has NO long range capability, which yes, it's speed can help it define the range of the engagement, but I've said it before, if you are choosing to close with this design, you have done something very, very wrong. And the PV of this variant agrees with me. At least the ENE special keeps you from blowing up.

That's it for now, enjoy everyone!