This is the last of my article series on custom designs for Alpha Strike. It's been fun doing this, and sharing them with you, my readers.

Some of these are again, refits that occurred to me that make a bit of sense and in one case, I actually made a miniatures conversion for it (and boy, was it a lot of work). One was an also ran in a CBT.com forum contest, that actually I think is a solid 'Mech design.

So, without further ado, let's get started.

Come on, who doesn't have their Hunchback HGR refit? Well, this one is mine. The medium range, of course, isn't bad. the others well, don't try to fight this thing at long range IMO. Speed is meh, armor is decent, but nothing to write home about. Basically, this gets an HGR into the fight and keeps it there for a bit. 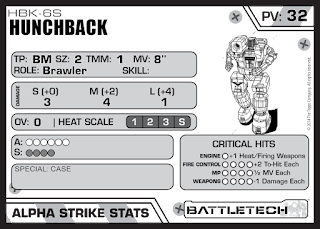 Ok, this was an idea I am surprised nobody came up with. A serious (not fanciful) attempt to increase the engagement range of the Hunchback. (Gauss Rifles are nice, but nah, not my idea of a serious idea for the Hunchback, congrats, you just created the world's slowest Hollander). So, I removed the AC/20, and replaced it with an Ultra AC/10. More range, and yeah, both shells MIGHT hit? Is it a perfect solution? No. but it beats having the jerk with a PPC (most Capellan designs) dance out of range of your guns while he picks you apart. Now you have a surprise for him. A lance of these things would be real fun to see, damage is respectable, but not awesome at Medium and Long range, which is what it's intended to do. Armor is again, meh. So is speed. You use the 'Mech inside it's role, and you'll do alright. 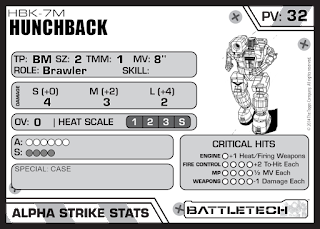 An all-energy Hatchetman with TSM, and it's faster to boot. Yeah, I am also surprised nobody came up with this sooner either.  It's initial damage curve is low, but the Overheat makes it brutal. The speed is nice, and with a 10"j move, there is not a lot of places you cannot get on the table. Armor is decent, but structure is weak (my darn XL engine fetish again). In short, this 'Mech is a striker, it gets into trouble, hits fast, and then runs like hell before the weight of fire comes down. It also does well as a Skirmisher, probing the enemy line to find out where it is. 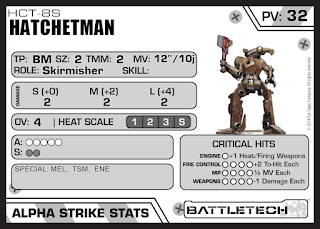 The Landsheckt is an affordable 'Mech for mercenaries, but with new tech. Entries were capped in the proposal for the contest at 7.5 million C-Bills, and I think I came in around 5.5 or so. It was reasonably fast, based on a Thunderbolt Chassis, but strengthened, and had a Gauss Rifle, a brace of lasers and machine guns (hey, counter-insurgency contracts come and go, right?) and had decent armor.

It came in as an honorable mention, and I was happy with that. I still think it's a viable design for merc outfits, or some of the more wealthy militias out there. Speed is meh, but the damage curve is pretty decent. It does a skirmish role well, and can stand in the line pretty well too. It's armor is good, and will take punishment for a while, and if it gets close, it's going to hurt with both the weapons, and the hatchet. In short, this thing is a fairly decent design for the intended role. 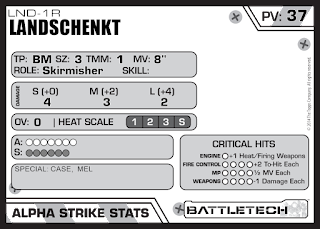 This is my idea of an emergency variant for the Victor forces and other customers for the Nightstar during the Civil War era. A shortage of Gauss Rifles could lead to an emergency variant mounting RAC/5s instead. I can see this thing being real popular after, though it has some flaws, namely, ammo limits, but RACs have always done well by me. At least, they have in CBT.

The 'Mech loses some of that granularity in Alpha Strike, but it is still a beast, especially if it Overheats. Close and Medium range firepower is just plain scary, it moves well, for an Assault, especially when it jumps. It may not have the twin Gauss to hold enemies at bay, but pair this with some plain vanilla Nightstars, or some other Assaults with LRMs or Gauss, and this thing is going to put some hurt out there.  Armor is quite a bit, so you can stay in close for a while, but once it's penetrated, it's time to go, as the structure is a bit thin.

I did a miniature conversion for this thing, but inexplicably, I did not take any pictures of either one I worked on? Good thing I still have one, eh? 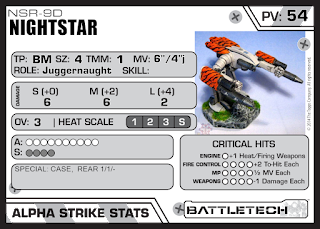