So, here we are again with some more custom designs, I really used to churn them out in my youth, and one we're going to see here is an oldie, but a goodie. It's killed a lot of Clan 'Mechs since my Junior High days when I first unleashed this monster.

The rest are more refits, ideas that popped up here and there, and a 'Mech I designed during a really dark night. Who says looking into the abyss can't have it's inspiration?

So, without further ado?

I designed the Destructor to respond to some of the issues I was having in CBT at the time (Junior High). I was tired of folks in light mechs getting behind my heavier stuff with impunity, and when I read the rules about arm flips..I got inspired. Very inspired. I also had, at the time, been reading a lot about WW-I Battleship and Battlecruiser design, and it has influenced my ideas on 'Mech design to this day, where I tend to group my weapons into range brackets, one bracket for long range, one for medium, and one for short, with Alphas only for emergencies.

I must say, it worked pretty well, the Destructor, in an early field test, killed a Dasher that tried to get behind it on the left side..right where the Gauss Rifle flipped around and caught it in the face. 15 points to a Dasher's leg is enough to pretty much put it out of action.

It also went nuts and melted a Mad Cat's center torso with it's bevy of Medium Pulse Lasers. Yeah, it was a monster, but a hot running one. You really had to watch the heat with the Destructor, but it delivered on the mayhem quotient, if you understood how to use her.

In Alpha Strike, she is a well armored beast, though not much structure (I had a thing for XL engines in Junior High/High School). Her range numbers are to be honest, a bit surprising to me, but the overheat of 3 doesn't. If it wants to go wild, it sure can, but it will pay for it. 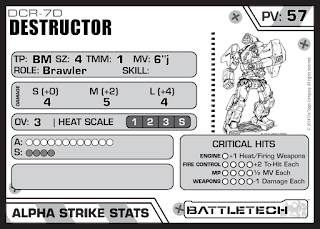 I have upgraded the design over the years, the 8D was an attempt to increase some speed and lethality at close range. It worked, to a point, and the overheat goes down to 2. It's still a beast of a design, in my opinion. The increased speed is a plus, but like most assault mechs, it should stay close to it's lancemates. 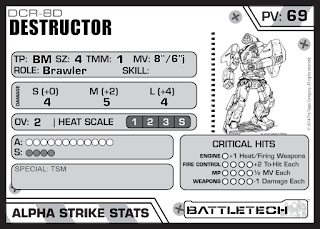 The main change I made with the 9D was replacing the Gauss Rifle with an Ultra AC/20 and the SRM-6 with an SRM-4 Streak. It made the 'Mech an absolute beast at close range, but hurt the long range potential. Thus, the 9D is like a lot of Assault 'Mechs, it needs to be close to do most of the hurt it's capable of. The Overheat of 4 is very high, probably the highest I have ever seen it on an Alpha Strike card. Yeah, the 9D could be frightening at close range. But with it's movement, it has to get there. 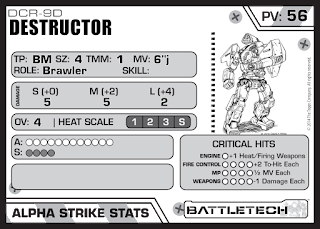 The 10D was a hybrid of the 8 and 9D, but the Gauss Rifle was replaced by a RAC/5 and a Targeting Computer. All the lasers became standard versions, and yeah, the numbers were not at all changed from the 9D. 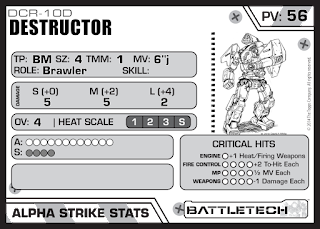 All in all, properly used, the Destructor is a beast of a 'Mech. But that hinges on the concept of "properly used". Improperly used, the 'Mech will easily shut down and become a paperweight. Judicious use of the overheat rule, however, will make a lot of threats go away.

This 'Mech was designed to answer the question of "what the heck do the Clans use for training 'Mechs?" So, I designed this. As it turns out, it's a solid 40 ton design with one of each basic type of weapons system in CBT: Projectile, Short and Long Range Missile, and Energy. It's not the most mobile 45 tonner in the world, but it can jump, and the weapons systems are all tried and true. In fact, some of the lesser clans probably issue the mech to some of their Solahma clusters.

So how does she translate into Alpha Strike? As you can see, pretty respectably, decent armor, and structure, good turn of speed, and decent damage at all rangebands. It's TMM is a bit low for it's type, but hey, it's a training 'Mech, right? 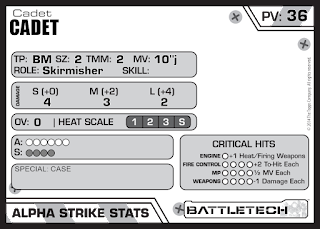 The Totenvogel (Death Bird) has been one of those designs that came unbidden during a night I'd kinda rather forget. Sometimes, it's not always the light that inspires us. And this thing, well, it's the Aramis answer to the Stuka.  She was designed to deal primarily with non-Mech forces in an urban environment. You can imagine what uses Aramis put her to. I guess I should not have been surprised, but the Totenvogel seemed to have a bit of a following on the internet at one point, and it was fun to write the fluff, from a dark point of view, but we're not here for any of that.

We're here to see how this thing translates into Alpha Strike.

The TG-1V model translates pretty much as it should, it's a 55 ton 'Mech optimized for urban combat, good turn of speed, and it jumps. Armor is meh, but what do you expect? She can put out decent, but not great firepower at close range, and even can do some damage at long range. 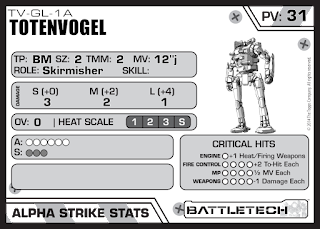 The TG-2V model was a field modification done by Aramis 'Mechwarriors who felt they needed more anti-Mech firepower from the design. It increased the medium range firepower a bit, but other than that, it's really not that much different from the 1A. 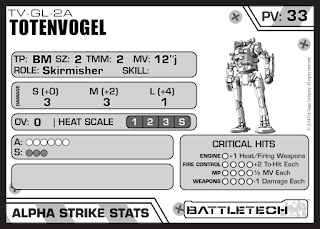