As we all know, name a CBT player who doesn't have a custom design, or 20 sitting around in a folder, or a hard drive somewhere. Maybe about half of them have actually been played with, but hey, what the heck, right, it's fun just to develop the things!

One thing about Alpha Strike is that it granulates the Record Sheets into small cards, and yes, some of the more nuanced features of our designs tend to get lost, but let's face it, it's a great way to get a veritable horde of your designs onto the table!

So yeah, I love the CBT Conversion rules in the Alpha Strike Compendium and love to make use of them. I will admit that my point numbers may be off, but they don't seem off when I compare them to other units in their weight class.

All in all, it's more fun 'Mechs to play with and fold, spindle, and mutilate.

So, without further ado:

The ARC-3K Archer was designed as basically a SLEP for older Combine Archers in militia units, it's got a pair of MRM-30s and some lasers for backup. I didn't think of this thing as much more of a spew a few missiles, then wade in and beat the snot out of whatever got hurt badly enough by said missile spam.

In Alpha Strike, the MRMs cost it a long-range capability, but with 4 damage at close and medium range, it's a contender in it's weight class. It's got an Overheat of 2 if it needs it, which means potentially, in close, it could be really nasty, though with a Speed of only 8, it's going to have quite the time getting there. Armor and Structure are, meh, but what do you expect? And it has some rear protection, so it won't be totally helpless if outflanked, but best it stays close to it's lancemates with it's speed and TMM. 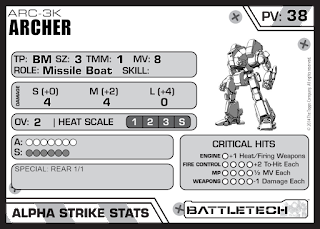 Ok, this thing was in response to a contest on Scrapyard Armory, design the meanest Banshee refit you can for a bandit king who had been a Merc on the Clan Front..or at least that's how I remember the RFP. Well, ok, so I managed to put a hatchet, a pair of LRM-10s and a Large Laser, along with some medium pulses in the thing...and downgraded the engine, while adding some jump jets, and the armor is pretty scary. And yeah, I did win that contest...

So how did I do? With a 2 damage at Long Range, and 5 at Medium and Close? Yikes. It's got CASE, so the ammo explosions aren't a factor. Not to mention the Hatchet means a longer melee range. It's move, even with the jump, is still only 6, but hey, you can at least get over a ton of obstacles.  And the armor..what is not to like about the armor, right? Considering this was in the hands of a 2 pilot in the scenario pack? Yeah, bad news. 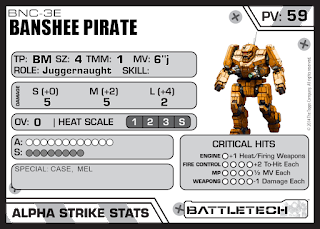 This version of the venerable Crab was in my mind, the Combine's early response to the Clan Ryoken. The original Crab was in many cases, undergunned, and too slow to deal with the favored medium OmniMech of the Smoke Jaguars. So, while the Crab is in many ways, a tight design, it's not one that doesn't have SOME room for improvement.

I made the engine XL, and then replaced the Large Lasers with ER PPCs. I then added a few heat sinks and made the 'Mech a 6/9. It's probably more vulnerable than a stock Crab, but it can move as fast as a Ryoken, and it may not have her firepower, but it's able to choose the time and place of the engagement at least.

So, for Alpha Strike,  my thoughts bore out, her firepower is 3 in close and at medium range, with a 2 at long, respectable for her weight class, but it probably won't bring down a Ryoken. She can move respectably at 12, but there are faster in her weight class. She is an energy boat, so no ammo worries, and she doesn't have overheat, which has good and bad points. But, she does have some possibilities, just so long as you realize the armor is meh, and the structure is flimsy. Don't get her into any trouble you cannot get out of just as fast. 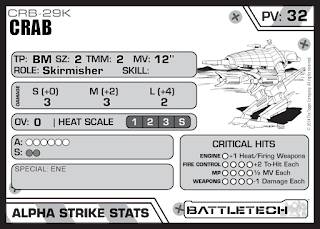 The 30K was a slight improvement, I added TSM, which improved the speed, and somehow found room for jump jets. That kind of mobility could potentially cause even some Clan Light 'Mech designs some real trouble, and the 30K has real potential as a Striker, as well as a Skirmisher.  But, she loses a little of her firepower to make room for all this. There are better armed Light 'Mech designs in my opinion. 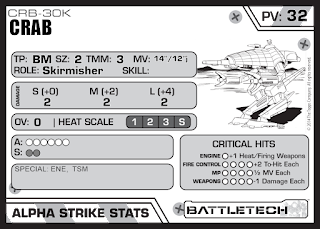 The Epee was in the vein of the Draconis 'March's creation of the Sentry and the Watchman. Both designs were meant to be a SLEP (Service Life Extention Program) for captured Combine Panthers in DMM and planetary militia units. Robinson Battleworks took some 200 captured Panthers in hand, replaced the engine with an XL, replaced the PPC with an ER Large Laser, and improved the armor coverage.

So, how did it all play out? Well, she is faster than the average Panther. Probably equal in the armor and firepower department,  but the speed will matter in an engagement with any model of Panther. She still has the SRMs, and all in all, she is a decent Panther upgrade. She even has some sting at long range and decent firepower up close. The armor and structure is a bit fragile, but for a light mech, it's not too bad. 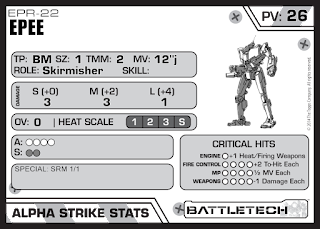 The 23 is meant as an upgrade for frontline units in the Draconis March that have captured Panthers, like the Robinson Rangers, and the New Ivaarsen Chasseurs. The 23 has a little less firepower, but an all energy loadout, and with ECM, can do her share to disrupt those Combine C3 networks. 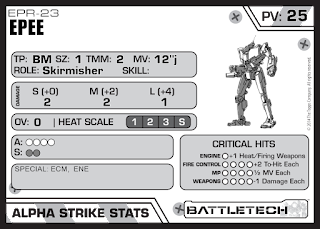