More designs for Alpha Strike, this time from MFUK, also, some designs from Battletechnology!

A lot of us remember a little organization known as MechForce UK (MFUK), and the nifty record sheets and miniatures they put out. I remember getting my hands on their Crusader variant (the Templar, which had multiple medium lasers), and then letting it sit in my "to-do" box until I sold the entire thing as I needed to make room as I was moving, that's ok, it went to a good home.

Recently, they have established a Facebook page and have posted all of their published works for free download if you are a member of the page. I naturally decided, why not convert some of the designs to Alpha Strike?

I also made to convert some designs from an oldie but goodie, Battletechnology, which I used to pick up with gust from my FLGS every time I saw a new issue.

So, I did. Note, this list is not exhaustive...but I picked some designs we could all have some fun with and can get some miniatures easily for, or just happened to catch my fancy...

So, without further ado, let's get started, shall we? 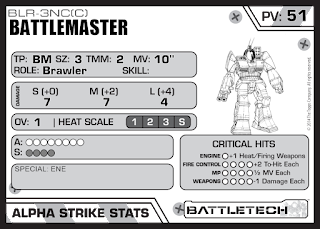 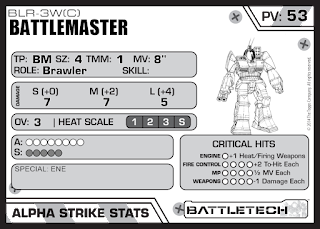 Both models of the Clan-model Battlemaster are absolute beasts at Medium and Short range, at Long range, the Wolf Clan model has a slight advantage, but the Nova Cat model is a bit more heat efficient, and a bit faster, due to the fact the 'Cats took an 85 ton Battlemech, and made it 75 tons, which can be an unpleasant surprise for a lot of folks expecting a 8" move out of a bog standard Battlemech. The Wolf Clan mech is tougher though, and can take a real pounding, whereas the Nova Cat model, once the armor is gone, you're best served to make for home, as you're not going to be around very long. Point values are similar, due to the fact both 'Mechs are obscenely over-gunned. Both of these models would go very well in a solahma or other 2nd Line Trinary, and would be a fun opponent for anybody raiding either Clan's holdings. 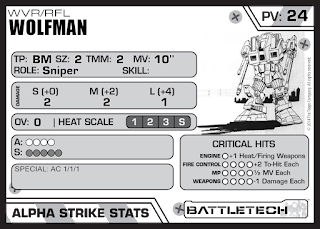 When the "Wolfman" appeared in the pages of Battletechnology, I was, unlike most readers, intrigued. It was the heyday of "Mad Max Battletech" and I think everyone designed at least one "FrankenMech", but this one had some real promise. Somehow, even with FASA Physics, they got a 60 ton Rifleman and a 55 ton Wolverine to somehow meet in the middle and make a decent, if not great Medium design that would be...respectable if you're playing 3025. It's got promise as a Sniper, but it's not the fastest thing on the table. It can at least hit out to Long range, but the damage numbers are a bit anemic, and when you have more structure than armor? It's best not to go picking a close range fight. But, it's got a decent TMM and I do wonder if a SL-tech refit of this thing might be fun to try, of course, Ultras are just right out, the weight is kinda tight on this design. 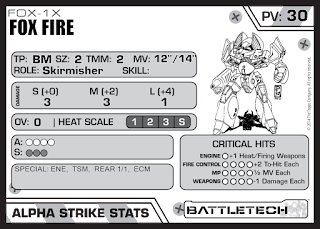 The Fox Fire comes from the MFUK book "The Further Adventures of the Fox's Teeth" by David L. McCulloch, who also wrote Starterbook: Sword and Dragon. Both books had a lot of similarities in the way they treated the Fox's Teeth, but "Further Adventures..." went more into detail into the unit's activities raiding the 'Clans. Moreover, they had some 'Mech designs in the back of the book, including this one; the FOX-1X Fox Fire. So, there's a lot to like here. It's probably one of the nastiest 40 tonners I have ever seen. It's fast, even faster when the TSM activates, which with no overheat, it won't in Alpha Strike. It's an all energy loadout, and has ECM, so it's really going to dash in, wreak havoc, and then run like hell before the heat comes down. which I can appreciate in a design. In short, this is a 'Mech with few bad habits and a lot of good ones. Just don't get into any long range fights with this thing..it's not meant for it. 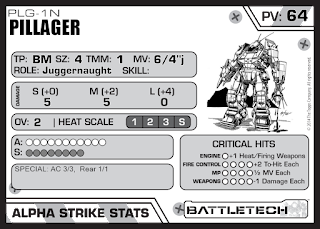 We know, this is a 'Mech from Stardate Magazine, but I decided I wanted to have an original Pillager with the original artwork. And yes, it does look pretty good, no? The Pillager dates back to when 'Mechs had two pages of lovingly crafted and written TRO entries (and the Pillager's original entries were at times, a bit unsettling...especially under the notable pilots section). But as a 'Mech, who wouldn't want something in the 3025 era that packed two AC/20s? Heck, this thing could compete in the later eras as well. It's not fast, nor is it blessed with long range fire, but it's Short and Medium range numbers are scary, not to mention if you throw in the overheat. My best advice for fighting a 'Mech like this? Don't close, ever. Shower this thing in LRM fire and call it a day, but it's going to take a lot of LRMs to do it, as the armor and structure numbers are gigundus.

So, that's it for today. I will post more as I can make them, but hey, this ought to keep you guys happy for a while.